Gar is a type of freshwater fish that belongs to the Lepisosteidae family and is one of the most aggressive fish out there. They have probably attracted many monster fish lovers due to their exotic nature.

There are seven species of gar fish that can be found in the eastern parts of North America, Central America, and the Caribbean. Some species are collected from the wild and sold as aquarium fish. They have been around for millions of years and won the planet at the same time as the dinosaurs.

There are many fish called gar that looks a lot like them, but there are only seven true species on the planet now. Let’s go through the interesting and useful facts related to the top seven gar species.

Alligator Gar (Atractosteus spatula) is the most famous fish in the Gar family which is also known as the undisputed king of the family. If you’re looking down into the water, the head and teeth of this animal can resemble an alligator as they reach a very big size.

Alligator Gar is native to the Central and South Eastern states of the USA and Northern & Central Mexico. They are very adaptable and can be found in various habitats. But they tend to stay away from fast-moving water.

The maximum recorded length for an Alligator Gar is just over 3 meters which is around 118 inches. So, this fish is only suited for larger aquariums or ponds. As this fish is found in a wide range of habitats, it has quite a wide temperature range from 11 to 23 degrees Celsius and a Ph anywhere from 6.0 to 8.0.

They eat almost anything that can fit into their mouth, and their diet includes a wide range of creatures. They are primarily fed on fish, but they also eat blue crabs, small turtles, and waterfowl.

Platinum Gar is the Albino version of Alligator Gar and it is the most expensive species in the aquarium hobby. They are also known as “Whiteies” or the White River Monsters.

Platinium Alligator Gars can be found in the Mississippi river basin and are currently identified as an important missing piece of the ecosystem. In body shape, size, and habitat, it is undoubtedly a large Alligator Gar.

Despite how they look, they pose no threats to humans. There can be incidents in which they bite their keepers, but there are no known major attacks on humans. But it can be a passive danger as their eggs are poisonous. The toxicity in eggs is a defense mechanism against predators that would come to eat their eggs.

Because of their massive size and fearsome appearance, the alligator gars have very few natural predators. One of the few is actual alligators.

Spotted gar (Lepisosteus oculatus) can be found in the United States and Northern Mexico. They are also adaptable fish, that can be found in a wide range of habitats including lakes, rivers backwaters, and pools.

This species is a little smaller and only reaches up to 1.25 meters long which is around 50 inches. If you’re looking to keep it in an aquarium, it prefers a cool temperature of around 12 to 20 degrees Celsius and a PH of 6 to 8.

Spotted gar is a great ambush predator. In the wild, it feeds on smaller fishes and aquatic crustaceans. Although dead foods will eventually be accepted, it may take a little while to wean off live foods.

When this fish is a juvenile, it’ll need to be fed every day. But once it reaches maturity, it’ll only need one or two meals per week as they have quite a slow metabolism. However, Spotted Gar is one of the prettiest gars out there to keep in aquariums.

Florida Gar (Lepisosteus platyrhincus) has got its name, as it can be found in Florida and also some parts of Georgia. In these areas, it inhabits canals, lakes, rivers, and large parts of the everglades.

Florida gar is a  sister species to the Spotted Gar, and it’s quite difficult to tell them apart at first glance. This species is the most commonly sold in the aquarium trade. Because of the similarities to the spotted gar, it’s normally sold under that name too.

They can reach a maximum size of around 86 centimeters which is around 34 inches. As they’re found in Florida, they prefer a temperature a little higher around 22 to 26 degrees Celsius, and a PH anywhere from 7 to 7.5. Florida Gar is a very beautiful species in the family.

Similar to all the other garfish, Florida Gar also, primarily feeds on fish along with some crustaceans and insects.

They are also great ambush predators. They try to imitate logs and driftwood while they’re swimming along the surface and use a sideways striking motion to catch their prey.

As you can guess from its name, Cuban Gar (Atractosteus tristoechus) is endemic to Cuba. It is found throughout the western parts of the island and in the isle of youth.

In these areas, they’re found in various habitats, including large lakes, rivers, and sluggish tributaries. They can reach a massive 1.8 meters long, which is around 71 inches. Very few people know about this species of gar, and that’s because they’re one of the rarest out there.

Currently, they are an endangered species. But numerous conservation efforts are being made to help save this species. As they’re so endangered in the wild, they’re very hard to find in the aquarium trade. However, if you did manage to get your hands on one of them, please carefully take care of them.

Normally Cuban gar lives in temperatures like 18 to 23 degrees Celsius which is around 64 to 73 degrees Fahrenheit and a PH anywhere from 5.5 to 8.

This fish is mainly episcopal in the wild but will also feed on most things that fall into the water, such as amphibians and large insects.

Similar to all other gar species, Cuban gar also can breathe atmospheric oxygen with their primitive swim bladder.

If you’re thinking about buying a Cuban gar, it’s a very big decision. If maintained properly, theycan live for decades. It’s such a big fish that is very difficult to re-home. So it is a very big decision to make. Despite this is a very beautiful species and would make a great addition to a monster tank.

Longnose gars (Lepisosteus osseus) are normally found in the Eastern half of North and Central America. It can normally be found in quiet weedy or rocky areas of freshwater lakes.

Longnose Gar had been the most abundant and widely distributed of all the gar species. Their fossils have been found in Africa, Asia, Europe, North America, and South America.

There is no point in guessing where this fish got its name as it has a very long snout. With the help of its long snout, it can reach up to 2 meters long which is around 79 inches.

If you’re looking to keep them in the aquarium, they like a cooler temperature of 12 to 20 degrees Celsius and a PH anywhere from 7 to 8.

Longnose Gar is another species that has a long life span. Its average lifespan is around 20 to 36 years. So if you’re looking to buy one, you need to plan it out.

Hence, these fish can’t open their mouths very wide; they primarily feed on smaller fish like shad and sunfish. These are normally surface feeders and tend to be more active at night like many other gar species.

The long nose Gar has very thick scales. It acts almost like a suit of armor and is very hard to penetrate. So the only predator of this fish also is the American alligator.

The shortnose gar is the smallest species in the Gar family and reaches a maximum size of 88 centimeters which is around 35 inches. Despite this being a very small species of gar, you still need a giant aquarium to house one of these fish.

In the wild, they feed on other fish, amphibians, and crustaceans. So in the aquarium, they should be fed meaty diets such as whitefish, worms, and shrimp.

Tropical Garfish (Atractosteus tropicus) can be found in the Caribbean and Central America. It is normally found in a wide range of slow-moving habitats such as lakes and backwaters and tends to stay away from swiftly moving waters.

Tropical Gars reach a maximum size of around 1.25 meters which is around 50 inches. They prefer a higher temperature of around 22 to 28 degrees Celsius and a PH anywhere from 6 to 8.5.

Tropical gar appears to be very similar to the long nose gar in color and markings. However, it’s very easy to tell it apart with the shorter, broader snout.

Tropical gar primarily feeds on fish, with cichlids making up most of its diet. But it’s also an opportunistic feeder. So eat any insects and amphibians on the surface of the water.

Gars are very popular in the aquarium hobby because they’re both pretty and very voracious predators. So what would you prefer out of these species? Read our Complete care guide for aquarium garfish. 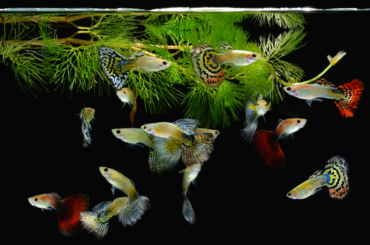 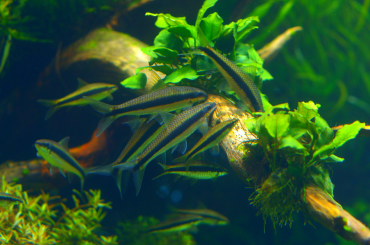 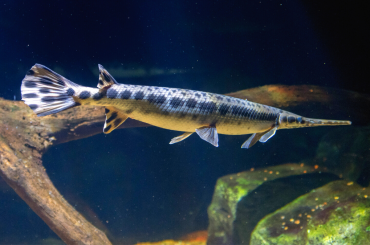 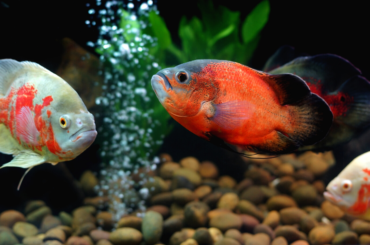